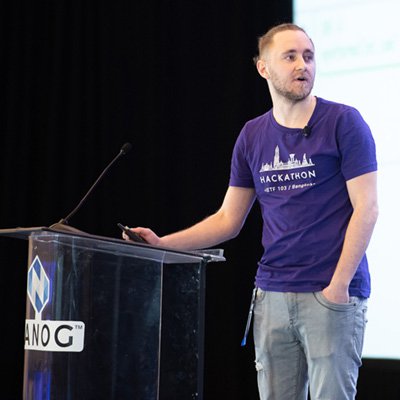 Michael Costello is a Director of Engineering at Netflix where he leads a team focused on network infrastructure control and automation. He is finishing his second term on the NANOG Program Committee, during which time he has been deeply involved in the Hackathon, and serves on the Education Committee. He is also a board member of Community IX.

Michael holds bachelor's degrees in Electrical Engineering and Physics from Bucknell University and a master's degree in Computer Science from Columbia University.

John is a PhD candidate in Computer Science at the University of Illinois Chicago studying under the tutelage of Chris Kanich. He is a principal analyst at NETSCOUT on the ATLAS Security Engineering and Response Team (ASERT). John is also adjunct faculty in the College of Computing and Digital Media at DePaul University. He currently serves as a research fellow at ICANN, sits on the NANOG program committee, and operates DataPlane.org.